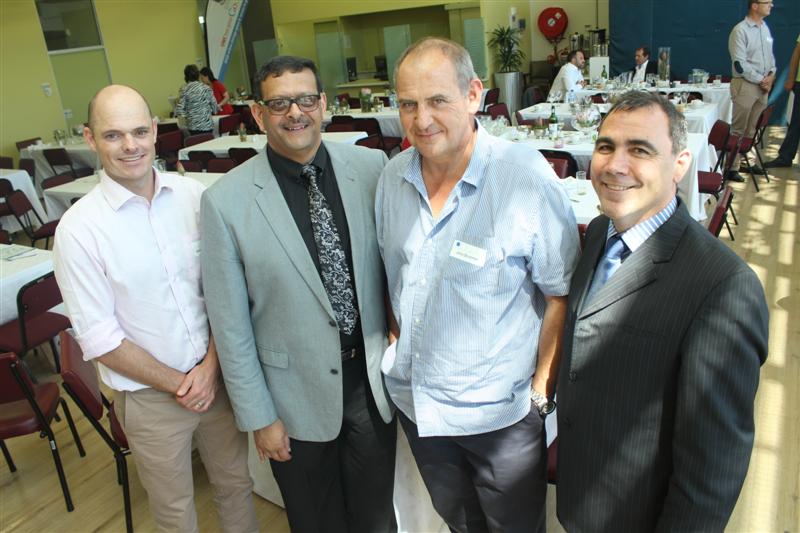 In the makeshift dining hall, filled with tables covered with elegant white linen, in which the recently refurbished reception area of the UWC is located, 150 people are taking a break whilst attending a pre-conference traders day with 5 parallel sessions. The hustle and bustle resembles the frenetic activity of an ant colony.

This is the pre-conference to the Inaugural Congress of the Southern African Association of Osseointegration (SAAO). Dr Louwrens ‘Blackie’ Swart explained that getting this group of members of the academia and private practice together to host a very organized and smooth-running congress was nothing short of a small miracle. The gathering was made possible after the SAAO and the dean of UWC, Prof Y Osman agreed to an MoU. UWC must be complimented and congratulated on completing the mammoth task of making their facilities available whilst undergoing a renovation process. They clearly went the extra mile, a fact that was evident to all delegates, as both the traders and delegates offered numerous words of praise. ‘This is but a small start to our future co-operation’, Dr Louwrens said.

The SAAO managed to bring together researchers and practitioners from across South Africa, Asia and Europe working at the cutting edge of dental implantology to the UWC facilities. Their initiative indicates the importance that UWC places on our academic institutions delivering the best possible treatment to our patient population by providing our students with the knowledge that they require in order to complete this important task in the future.

The focus of this landmark gathering, titled Current and Future Visions in Implantology, was on technical developments in osseointegration, which explores the interaction between dental implants and living bone and tissue. Talks and a series of hands-on workshops covered such topics as diagnosis, emerging technologies, the design and aesthetics of implants, and treatment strategies and complications. A highlight of the Congress was a debate around the use of dental implants versus endodontic treatment, i.e., fixing rather than removing and replacing problematic teeth.

The focus on the technical aspects of osseointegration was by design, explained Dr Mogammad Peck, a member of the SAAO and a researcher with UWC. ‘The idea was to increase the knowledge of general dentists, both from an academic and a clinical point of view’, said Peck.

Another standout feature of the Congress was its origin, in many ways, in the growing collaboration between the SAAO and the UWC dentistry faculty. Over the past five years, UWC had developed a strong partnership with practitioners and, since its founding, with the SAAO as well.

‘Private practitioners have signed a Memorandum of Understanding with the University, in which we agreed to help each other’, explained Swart.

As a result of their association with UWC, private practitioners get to develop their field and expertise. In return, they build goodwill with academia and students through their teaching and an annual Dental Implant Day, which practitioners have hosted for the past five years as a means of passing on their expertise to the university’s final-year dentistry students. Their only reward is the sense of satisfaction obtained from making a positive contribution.

It’s the budding collaboration between practitioners and academia that faculty members wish to develop, Professor Mohamed Parker, deputy dean of Academic and Student Affairs, told delegates. ‘I always say that we are on one end of the spectrum, which is the academic side’, said Parker, ‘but what actually happens at the coalface is more important’.

20 August 2019
The Fourth International Congress of the SAAO is titled: Success - Merging Technology with...

Renewal of your SAAO membership

13 October 2017
If your year has been anything like mine it comes as a shock to realise that there are only a few...

20 July 2017
The South African Association of Osseointegration (SAAO) is very happy to announce that the 3Rd...

15 November 2014
Dear Delegate We would like to thank you for your participation in the Inaugural congress of the...

10 October 2014
In the makeshift dining hall, filled with tables covered with elegant white linen, in which the...

© 2017 The Southern African Association of Osseointegration (SAAO). All Rights Reserved.